Traditional singer from Dun Laoghaire, from a musical family. She first came to prominence at the Abbey Tavern in Howth. She recorded two LPs for EMI's Waverley label in the late 60s. She married guitarist Paddy Roche (of The Ludlows) and the two emigrated to the USA where they performed at the Philadelphia Folk Festival in 1969 and played the folk clubs for a couple of years. They returned to Ireland on the birth of their first child in 1971. Anne released two albums on Hawk Records during 1973-74 but chose to retire from performance to raise a family. Her records are highly regarded.

Anne Byrne made numerous appearances on radio and TV. How much of this material still exists in the archives is unknown. She also appears on some of the folk compilations of the late 60s, not least one volume of the Abbey Tavern LPs. More details to folllow.

Anne Byrne and Paddy Roche currently live in Dun Laoghaire. Anne has suffered ill health over the past few years.


side one:
Oh, Sail Away
All My Trials ¹
The Travelling People ²
Bold Irish Boy ¹
The Beggar Man
Four Strong Winds


side one:
Pal O' Mine
The Croppy Boy
Mama You Been On My Mind
Come By The Hills
Lowlands Of Holland
Mary Hamilton
Friend To Me

side two:
The Foggy Dew
Hold On To Me Babe (Tom Paxton)
Kiandra
Plaisir D'Amour
Captain Farrell
Fiona And Shane
I'm Bound For The Mountains And The Sea (Tom Paxton)

Notes: Produced by W. Gordon Smith. The US edition omits two tracks ('Mama You Been On My Mind', 'Friend To Me') and resequences the rest. Issued as part of the Capitol International Series.

side one:
The Wind That Shakes The Barley
Lord of the Dance
Leon Rowsome - The Foxhunt
Bogey's Bonny Belle
High Germany
Buachaillin Dhoun 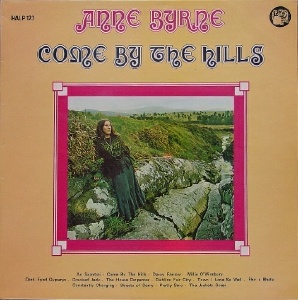