"The Go Lucky Four met by accident in that they all found themselves teaching in the same school in Belfast, Northern Ireland. At Christmas 1965 they appeared as an act in the school Concert and from there, the fame of the group spread. Little of their activities was known outside Belfast until the incident of the blowing up of Nelson's Pillar [in Dublin] on March 8th, 1966 provided the group with their first "big break!" Excuse the current terminology of the pop workd, but it wa simpossible to resist the pun.
Before the butt of the pillar had been removed the record "Up Went Nelson" had taken Ireland by storm. It went straight into the No.1 spot and stayed there for ten weeks. It is still selling.
Other records followed and throughout Ireland the group has been accepted as one of Ireland's leading folk groups. The group consists of John Sullivan, Finbar Carolan, Eamon McGirr, and lead singer Gerry Burns."--from the album sleevenotes.

Eamonn McGirr (1940-2004) was from Derry. He was a member of the 60s folk act The Go Lucky Four, a group of Belfast school teachers who scored a #1 hit in Ireland in 1966 with 'Up Went Nelson'. He later emigrated to the USA. Eamon McGirr released at least two solo singles.

side two:
Hi For The Beggarman
Song Of The Dawn
Belfast Brigade
Rap Tap Rap
Show Me The Man
Kimmage
Limerick Is Beautiful
It's A Grand Oul Country 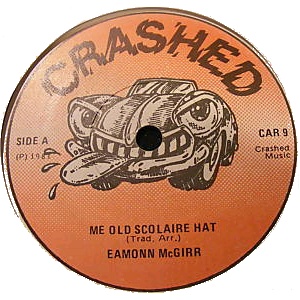 Help!: We need your help to complete this entry. If you can tell us more about this band then please do! We welcome any corrections, missing details, connections to other bands, where are they now, etc. We also need photos, scans, copies of releases or live or demo recordings, and any other memorabilia gathering dust in the attic. If you can help, please get in touch.