Dickie Rock is a crooner with a strong following in Ireland. His reputation was built during his years fronting The Miami Showband from 1962-1972. Some decent Rock & Roll recordings were made in the early years. A self-confessed admirer of Frank Sinatra, his recordings since the mid-70s have been in a vein similiar to his idol, from big band standards to easy listening pop. His career potential was limited arguably by his unwillingness to move abroad. Some say he had the potential for international stardom, that he was one of those people with 'presence' who could have been a big star.

Richard Rock - the family name is German in origin - was born in Cabra in Dublin in 1940. He sang as a boy soprano in church and loved early Rock & Roll, but he remained quiet and family oriented, and neither smoked nor drank. He also professed a love of crooners like Frank Sinatra and Tony Bennett. In 1959, while still working as an apprentice welder, he joined The Melochords, a local Rock & Roll group, replacing Butch Moore who had departed for the Capitol Showband. The Melochords included Brendan O'Connell on guitar and Gerry Hayes on piano and accordion. They were well regarded at the time. They played regular gigs at The Ritz in Ballyfermot and the Carlton Hall in Marino. In 1960 they played the Olympic Ballroom in Dublin for the first time, a major step up in venue. This should have heralded their entry into the 'bigtime', but instead their career stalled: the lucrative ballroom circuit was sewn up tight by the showband managers and promoters at that time, and The Melochords - like so many other pop, beat and rock & roll groups - could not progress further. Rock & Roll groups were simply not considered a bankable proposition by the larger venue owners.

This glass ceiling of earning potential led to The Melochords split in 1961: those who wanted to pursue the showband option eventually became The Cadets, with lead singer Eileen Reed. The Cadets became hugely successful in Ireland (and the UK to some extent) during the '60s but time has not been kind to their recordings, and Eileen Reid's voice seems better suited to sentimental country & western ballads - it is not a 60s pop voice. The rest of The Melochords became Richard Rock & The Echoes.

Richard Rock & The Echoes continued to carry the torch for Rock & Roll. They entered RTE Television's "Search For A TV Star" variety show and finished third. Their big break came in 1961 when they supported Cliff Richard & The Shadows at the National Stadium. They were offered a contract by Phil Solomon but it required they relocate to the UK which they were unwilling to do (a lucky escape, in hindsight!). Rock's profile had risen considerably since his debut in 1959 and he regularly received offers of work. Finally, unhappy with lack of progress with The Echoes, Rock accepted the invitation to audition for The Miami Showband in 1962. The Miami needed to replace singer Jimmy Harte who was emigrating to the USA. They had a regular gig at the Palm Beach club in Portmarnock, which meant regular pay. When Richard Rock joined them circa April 1962, he became Dickie Rock, and his years with The Miami were what established his lasting reputation in Ireland.

The Miami Showband had formed a year earlier in 1961. They were well organised and had good management. In a business which tended to penny pinch and cut corners, the Miami made a point of expecting and demanding the best. They were led by Joe Tyrell (keyboards). The rest of the lineup (ca 1962) was Tony Bogan (drums), Dennis Murray (bass), Clem Quinn (guitar), Murty Quinn (trombone), Tommy O'Rourke (trumpet) and Martin Phelan (sax). Over the next couple of years the band built a strong reputation. Their first single was recorded in November 1963 and it was #1 by January 1964. It stayed on the top spot for 6 weeks. Many more hits followed throughout the '60s, including several number ones, and including the first ever single to enter the Irish charts at #1, "Every Step Of The Way". The Miami became one of the top showbands in Ireland.

In 1966 Dickie Rock represented Ireland in the Eurovision song contest with "Come Back To Stay", finishing fourth. There was a spate of continental releases from this period, many with picture sleeves. The same year he was the subject of a documentry filmed by RTE "Portrait Of An Artist".

Unsatisfied with the level of remuneration given his status as 'the star' (a constant theme in Rock's autobiography), Rock requested a pay increase from the Miami management. This request was granted, which put Rock on a different financial footing from the rest of the group. Inevitably this led to discontent. While Rock was appearing at the Sopot International Song Contest in Poland in 1967, most of the band announced their intention to leave and set up their own band, The Sands. Thus the highly successful '60s lineup of The Miami split with only Tyrell and Bogan, both Miami directors, remaining. Clem Quinn later changed his mind and chose to stay. The rest of the vacancies were filled by Paul Ashford (bass), Fran O'Toole (keyboards), Brian McCoy (trumpet), Des McAlea (sax) and Pat McCarthy (trombone), many recruited from the ranks of various Dublin beat groups. Rock spent five more highly successful years fronting The Miami, but money remained a constant source of disgruntlement. He never felt sufficiently rewarded for his efforts.

Dickie Rock left The Miami in Sept 1972 for a solo career, eventually moving over to the cabaret circuit. He continued to perform, occasionally record, and work on his tan at his villa in Spain for the next 30+ years. His solo recordings consist of standards, ballads, and covers of the pop hits of the day for the most part, and are of little or no interest. Anyone wishing to know more about Rock's subsequent career is directed to his autobiography Always Me, published in 2007. In it he mentions winning the Golden Stag Festival in Brasov, Romania in March 1971, but my research shows he finished in joint fourth place, though he may have won a particular category. He appears on the LP commemorating the event (see below). His autobiography also mentions that while he was in Romania his brother Brian Rock (who fronted The Hustlers) filled in for him with The Miami during his absence. This is the only mention of Brian & The Hustlers in the entire book.


side one:
You Are My Treasure
Spanish Ways

side two:
Music From Across The Way
Playground Of My Mind

side one:
I Believe In Music
If
The Most Beautiful Girl In The World
Yesterday When I Was Young
Didn't We Know
A House Is Not A Home

side two:
Baby Don't Get Hooked On Me
The Old Fashioned Way
Sail Around The World
Till I Can't Take It Anymore
Until It's Time For You To Go

side one:
Door To The Sun
Without You
Hazel
Dear John
Hurt
Back Home Again

side two:
What Good Am I?
Scorn Not His Simplicity
When Will I See You Again
My Eileen
From A Jack To A King
Lost Without Your Love 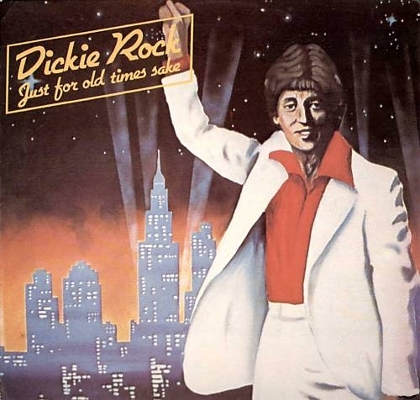 Tracks:
Every Step Of The Way
Yours
Till
I'll Hide My Tear Drops
There's Always Me
Coward Of The County
Angeline
Candy Store
Mandy
Just For Old Times Sake
Come Back To Stay
I Left My Heart In San Francisco
She Believes In Me
You're My World
Love Me Tender
Back Home Again
You Don't Have To Say You Love Me
How Could You Go
I Write The Songs
The Wonder Of You